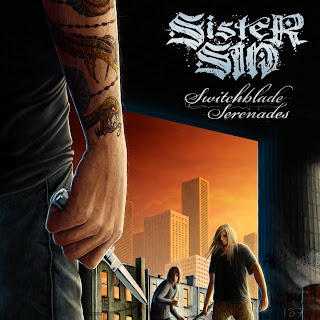 I’m always on the lookout for new music, and the holidays are a great time to catch some sales on albums I might have missed in the past. Amazon had a great $5 album sale and I discovered a band I don’t know how I hadn't heard--Sister Sin. This Swedish metal band has been around since 2002 and they are fantastic.

The band’s debut album Switchblade Serenades was released in 2008, but might as well have come out in 1988. Unlike a lot of recent bands that try to capture the feel of 80’s metal, Sister Sin nails the sound and feel of that era without it feeling forced. The songs are filled with big riffs, cheesy lyrics and chanted choruses that are reminiscent of the stadium rock days of old. Lead singer Liv Jagrell combines equal parts Blackie Lawless (W.A.S.P.) and Doro Pesch (Warlock), and guitarist Jimmy Hitula provides the big riffs and blazing solos that 80’s metal required.

What I love most about this band though is the energy they bring to each song. There was something wildly unapologetic about 80’s metal that I think Sister Sin has in spades. It just feels like they’re having a blast playing good old-fashioned heavy metal.

As far as a writing soundtrack, Switchblade Serenades is great for writing action scenes or any scene that has a lot of energy. It’s actually helping me get through the end of my current manuscript, which involves a pretty big fight scene.

I picked up all three of Sister Sin’s albums during the Amazon sale, and I’m sure I’ll write about all of them. But Switchblade Serenades is one you need to pick up if you're an old school metal fan.
Posted by See Brian Write at 8:00 AM