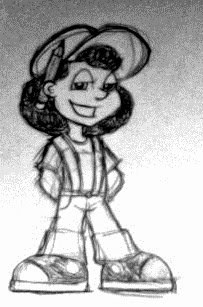 Unlike the 50,000-word undertaking that is National Novel Writing Month (NaNoWriMo) proper, Camp NaNoWriMo offers the flexibility for me to work on smaller projects while still participating in a NaNoWriMo event and feeling the support of the great community that surrounds it.

For Camp NaNoWriMo in July, I'm working on a project that is quite different than what I've done before. It's an all-ages project that I've been kicking around the idea for since 2008. The story and characters are inspired by the likes of Encyclopedia Brown, Scooby-Doo and Doctor Who, and the feel of the series will be akin to a Saturday morning cartoon.

The badly scanned picture at the top right of this post is actually an early concept sketch of the main character that a friend did for me. While the concept has evolved a bit since that time, the spirit of that sketch is absolutely still at the core of the character. My goal with this project is to write a series of stand-alone stories for younger readers.

For Camp NaNoWriMo this next month, I'll be writing the first story, with the hope of getting it out into the wild by the beginning of the upcoming school year. I've been sitting on this idea for a while, but my kids have made it a priority for me. They have been asking me to write this story since I fist pitched the idea to them a few years ago. Since most of what I write is adult horror, it will be nice to have something that they can enjoy now, and that can bring to the many family-oriented conventions and I attend throughout the year.

I'll be posting about my progress throughout July, so stay tuned! And for more info on Camp NaNoWriMo, head over to www.campnanowrimo.org.
Posted by See Brian Write at 9:12 AM