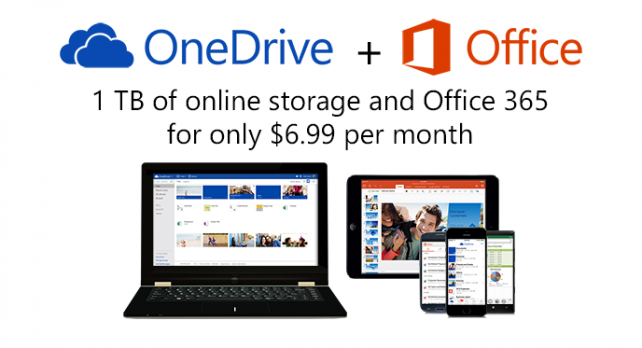 Just when I thought I was out, they pull me back in.

For the past few years, I had been making a steady move away from Microsoft. Don’t get me wrong, I’m not a MacHead, nor do I have anything against Microsoft (I’m a PC guy), but outside of their OS, I found Microsoft’s services to be too pricey. Specifically, I found their cloud storage and productivity apps to be overly expensive.

For productivity, I had moved away from Office to a combination of Google Docs and OpenOffice.org. Both of those services are free, and offer me pretty much everything I had been getting with Office. I still use Google Docs every single day (I’m writing this post on it now). Microsoft Office is over $100 if you buy the standalone software, and the subscription fees for Office 365 were not better, starting at $100 a year.

For cloud storage, I have been primarily using a combination of Google Drive and Dropbox for the past couple years. When I bought my Samsung phone a couple years ago, it came with an extra 50GB of Dropbox storage that was good for two years. All of my writing was pretty much stored in Google Drive, but everything else important has been kept in Dropbox.

When my Dropbox storage expired, I had originally planned to just go with the 100GB annual subscription, which is $100.

But then Microsoft changed the entire cloud storage landscape with a 1-2 punch that may just put Dropbox out of business.

Not only did Microsoft slash the prices on all of their cloud storage plans, but they put together a bundle that is a borderline impulse buy for anyone that has ever used Office. With every subscription to Office 365, Microsoft is giving users 1TB of cloud storage.

So, for $70 a year, I can have access to all of the Office programs I’ve used for years, and I get a terabyte of cloud storage. On top of that, they throw in free Skype minutes every month that I can use for international calls and calls to landlines, which comes in handy when I’m recording podcast interviews.

I switched to the Office365/OneDrive plan the day my Dropbox storage expired. This is a brilliant move by Microsoft, as it bundles a tool that millions use every day with a cloud storage service in a way that differentiates them from everyone else. I am very interested to see what Dropbox and other cloud storage services do in response. In the long run, I think it will end up making cloud storage cheaper for everyone, which is a good thing.

On a related note, Microsoft announced today that they are cutting 18,000 jobs over the next (which I understand is mostly affecting the Nokia side of things). It’s no secret Microsoft has found itself in need of a reinvention as Apple, Amazon, Google and others have completely disrupted the personal and mobile computing landscape. They need to get back in the game of mobile and cloud-based services. Leveraging Office, the most widely used productivity suite of all time, is a smart move.
Posted by See Brian Write at 1:17 PM