The Process Behind a Creepy Collaboration

With my first horror convention as an author coming up, I wanted to have a vertical banner at my table--something to draw people over that would give them an idea of what they could expect from my horror fiction. I had also been wanting to work with my photographer pal Kate Maldonado for a while, and the banner seemed like a great opportunity to collaborate. There is a timeless and otherworldly quality to Kate's imagery that I think horror stories strive to evoke as well.

For this banner, I wanted to visualize some of the themes of my own horror writing. Everyday people stumbling upon something they should never have seen. Things lurking in the shadows that are beyond human comprehension. And the danger that knowledge brings.

After talking a bit about the project online, we met and brainstormed a bunch of ideas. From the very beginning, I felt like Kate knew what I was looking for in terms of feel, and from there, I just wanted her to run with it.

Here's what she came up with: 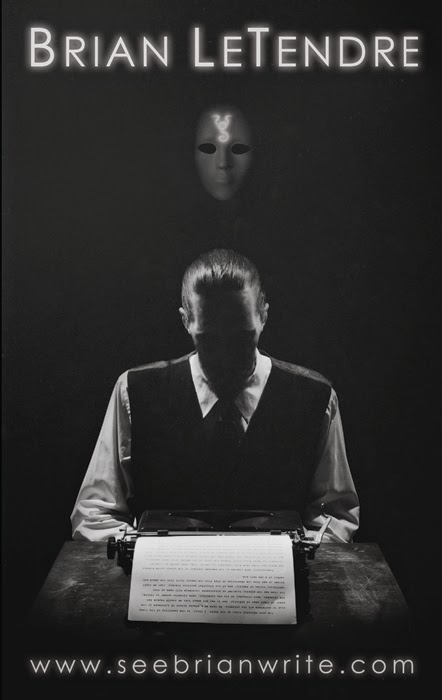 Aaaahhhhh! It's so freaking good!

Seriously, I love it. What I love the most though, is that I think it not only captures the feel of my writing, but it totally feels like Kate's work as well.

I asked Kate to talk a bit about her process for this image, and here's what she had to say:

The concept behind this image was very much a collaborative effort with Brian. The image of the writer at work while being approached by an unknown masked figure was inspired by a film noir aesthetic and elements of Brian's work.

I wanted to give the image an ominous feeling. I decided to use hard rim lighting that cloaked the writer figure's face in shadow which added mystery to the character. To give the writer figure a "Lovecraftian" look, the model wore a costume of a dress shirt, vest, and tie. The mask was propped up behind the model partially shielded from the main rim lighting creating a faint glow of even light on it so it appeared to be coming out of the darkness. To give the image an antiqued photograph look, I added a subtle dusty texture over the image in post.

The typewriter is a 1936 Royal Model O which I borrowed for the shoot. I printed a prop page to insert into the typewriter so that it looked like the writer was working while being approached by the masked figure. In keeping with the Lovecraft theme and as a fun Easter egg, I used the first page of Lovecraft's "The Call of Cthulhu" in a grungy typeface as the text on the writer's page.

This was a lot of fun to shoot and it was inspiring to work with Brian and Michael (my patient model). I look forward to future collaborations!

So kudos again to Kate, as she delivered something that was beyond my expectations. It was a blast working together.

And if Kate's style grabs you (and why the heck wouldn't it?), you can check out the fantastic prints she has for sale over at her Etsy store.
Posted by See Brian Write at 5:51 AM