When I checked in last week, I had just crossed the 50,000-word mark and "won" NaNoWriMo. But I still had a ways to go. I had a story that needed an ending, and I was determined to finish that story by November's end.

At around 2:30PM yesterday, I did just that. I finished my story with a final word count of 62, 844, which was my best finish ever. Last year I barely topped the 60k mark when I wrote the first draft for Lovecraft's Pupil, and I finished with around 58k when I wrote Lovecraft's Curse a couple years before that. What was more significant than 60k for me though was keeping my per-day average over 2,000 words for the first time ever. That might not seem like a big deal, but one of my goals for NaNoWriMo this year was to be more consistent. I finished NaNoWriMo with a 2200-word day, and finished the event with a 2094 per-day average. 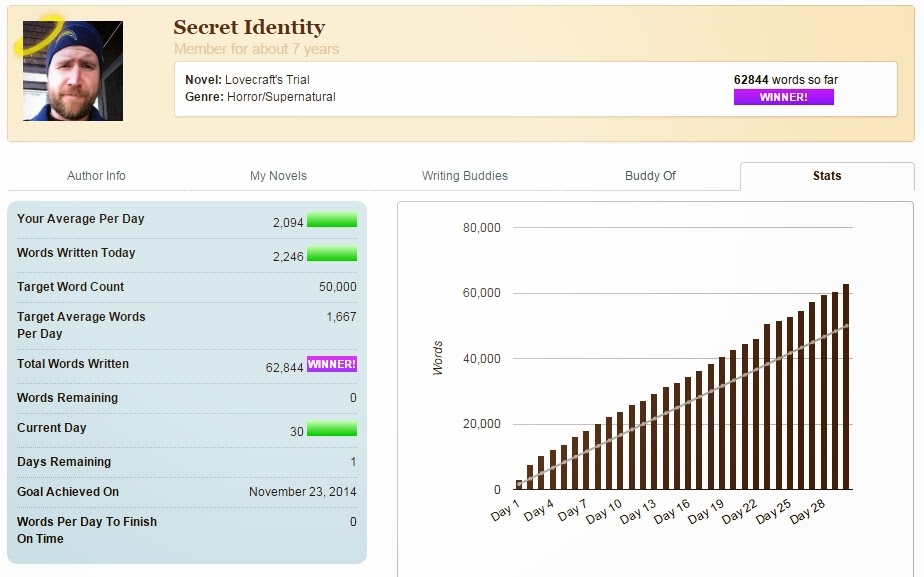 I mentioned last week about learning the importance of starting strong this year. But I wanted to finish strong as well, and not just in terms of word count. Chuck Wendig had a great post about finishing what you write this week on his blog. And while I had every intention of finishing my story, I wasn't sure if I'd finish it in November. I'd hit my 50k mark, but the first draft wasn't complete. Last year, the same thing happened, and it wasn't until months later that I finished the first draft of Lovecraft's Pupil, which is a primary reason that I haven't released that book yet.

So it was important to me to get the first draft of Lovecraft's Trial completed during NaNoWriMo. And now that it is, I can focus on making it better. I have a lot of rewrites to do, scenes that I need to add, and plenty that will need to be cut as well. But I have a first draft--a complete first draft--to work with.

I also came out of NaNoWriMo with something very precious--momentum. As I look forward to 2015, I have some big plans for the Parted Veil series, my podcasts and my webcomic Mo Stache. I'll be posting about some of those goals and plans over the rest of this month.

Stay tuned!
Posted by See Brian Write at 6:27 AM