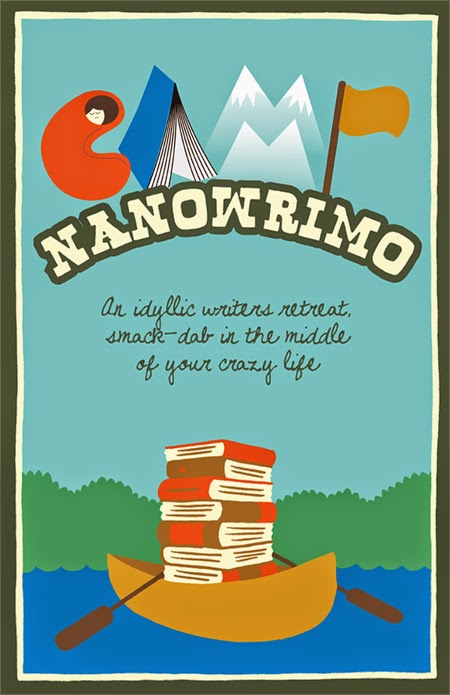 Well, I hit my word count goal for Camp NaNoWriMo this morning. Admittedly, my goal was pretty low--five hundred words a day for a fifteen thousand word total--but it's a victory, and I will gladly take it. I've said this before, but I use the Camp events to help get my daily writing back in shape, especially after the winter months, where I tend to get very little fiction writing done due to coaching basketball, holidays, etc.

So as a tune-up, this Camp NaNo has been a great success. I started with a goal of five hundred words a day. By week two I was hitting about seven hundred a day, and now I'm consistently cracking the thousand-word barrier. It's like a "Couch to 5K" program, but with words (I'll be posting more about this thought tomorrow).

I'm not done with my story yet, and I'm definitely not done with Camp NaNoWriMo. I plan on adding to my word count for the rest of the month, so the final total will be somewhere between twenty and twenty-two thousand words, which should make for a nice little novella when it's all said and done.

One of the things I've enjoyed most about this month is spending a little more time with Frank and Samantha, the main characters from Courting the King in Yellow. This story takes place alongside the events of Lovecraft's Pupil, and will give readers a closer look into what these two characters have been up to while they were out of the spotlight in the main series. I'm thinking about featuring them in another story for my Camp NaNo project in July, as well.

BUT THE BEST part of this Camp NaNo event has been my awesome cabin mates--Jolene Haley, Laura Chapman, Victoria Nations, Jessi S. and Vanessa Henderson. I've had some great cabins over the Camp NaNo events I've done, but this one takes the cake. We've had great discussions, everyone is super supportive, and it's been great learning from all of them. I've even thinking about stepping out of my comfort zone and trying a new genre in the near future. You've already heard the awesome Jolene Haley on the podcast, but I'm hoping to get some of my other cabin mates on the show in the months ahead. Seriously, the cabins alone make it worth participating in Camp NaNo. Such a great support system.

Later this week I'll be posting about using the Camp NaNo events like a training program for the big show in November. Stay tuned!
Posted by See Brian Write at 1:52 PM