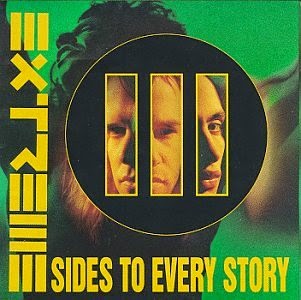 Every Tuesday here on SBW I'll be reviewing something I think is awesome. Comics, music, movies and more--some old, some new, all awesome.

Today's reviews is a CD I picked up at my local music shop during Record Store Day this past weekend: Extreme's III Sides to Every Story. This was one of the many albums I had during my high school years that disappeared sometime while I was away at college (thanks, mom). In picking it back up, I got to revisit an amazing album from one of the most under=-appreciated bands of all time.

Even if you don't think you've heard of Extreme, you probably have. They are a Boston-based band whose unique sound was kind of a funk-rock fusion. Guitarist Nuno Bettencourt is one of the best to ever pick up the instrument, and singer Gary Cherone is one of the most versatile voices of that era (he also spent some time as the lead singer of Van Halen in the mid-'90s). Chances are you first heard them either on the Bill and Ted's Excellent Adventure soundtrack (with the Nuno-shredding tune "Play With Me"):

Or their number one acoustic single "More Than Words," which still sees a decent amount of airplay over twenty years later:

III Sides to Every Story is, as you might imagine, the third studio album from Extreme. It was released in September of 1992, which is coincidentally when I started my freshman year of college (yes, I'm old--shut up). The album was a follow-up to the one that really put them on the map, 1990's Pornografitti, which went double platinum. And while III Sides was a commercial failure compared to Pornograffiti, I think it's by far Extreme's best album.

III Sides is a concept album of sorts, and the fourteen tracks (fifteen in certain versions) are grouped into three sections entitled "Yours," "Mine" and "The Truth."

The "Yours" section of the album is definitely the hardest rocking of the three, with Nuno's guitar work carrying sons like "Warheads" and "Peacemaker Die." This group of songs is also very politically charged, with a heavy anti-war message, as you can see from the album's second song, "Rest in Peace:"

While not as heavy as the first section, the "Mine" part of III Sides has some fantastic tunes, led by the catchy love song Tragic Comic and the world-weary "Stop the World."

The final act of III Sides is considered to be the weakest, mostly because the final three songs are longer, more rambling works and not as catchy as just about everything else on the album. But conceptually, I think it builds on what came before in the previous two sections, and as a part of the whole, it fits.

All in all, III Sides to Every Story is an hour and fifteen minute journey through the spectrum of Extreme's unique sound. As I said before, I think it's the best of Extreme's albums, but if you haven't spent time exploring their catalog, I highly recommend all of their stuff.
Posted by See Brian Write at 10:03 AM