If you've been following me on Twitter lately, I've been dropping a lot of hints about a super-secret writing project that I'm working on with another author. And while I haven't revealed exactly what the project is yet, I did post about it being a horror project, and that I am working with Jolene Haley.

But I am having so much damn fun with this project already that it's impossible not to talk about it more. So, I'll be doing a series of posts about how the project came about, and getting into some behind the scenes stuff as we go along. 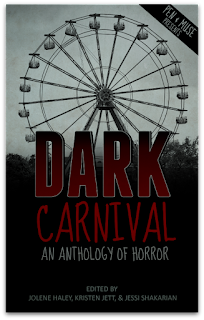 First, a bit about my writing partner--Jolene Haley is a fantastic YA and NA writer who runs the Pen & Muse blog that I rave about constantly. Not only is it a wonderful resource for writers, but Jolene and the Pen & Muse crew have brought writers together for very cool and creative events over the last few years. One of those events was a series of twisted carnival-themed stories and art called Dark Carnival, which was eventually collected into an eBook that sat atop the horror anthology list on Amazon for weeks (you can grab a copy on Amazon right here). She also founded the Midnight Society, a YA and NA horror blog, and Hocus Pocus & Co., a publisher of MG, YA and NA horror.

Jolene recently joined me on the SBW podcast to help folks prep for Camp NaNoWriMo (you can listen to that episode here). We had a lot of fun, and it turns out we had very similar interests when it came to horror. We started talking a bit about maybe working on something together in the future, and ideas were kicked around. It wasn't long before we found something that felt like a great concept to tackle together, and a project was born.

Actually, it was more like the project roared to life, as it came together so quickly it threatened to derail my completion of my Camp NaNo project. Now that Camp NaNo is over, this project has become my primary focus. We're a couple weeks in, and we're already over 22,000 words on the first draft. Ideas are flying, casualties are mounting, and I am having a blast writing with Jolene.

I'll be posting more about the process in the coming weeks, and you'll start to see more hints about he actual project as we get closer to summer. But I will say this--if you're a fan of '80s horror movies, you are in for a real treat.

Oh, and you should be following Jolene on twitter, and checking out her main website as well. She's aces.