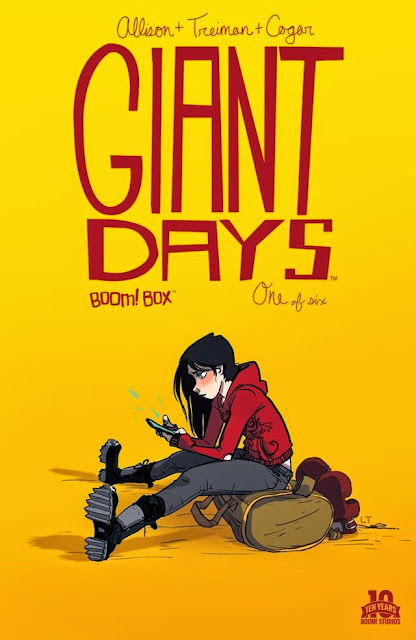 Man, I love when I dive into a new comic I know absolutely nothing about and it really blows me away. John Allison's Giant Days immediately became one of my favorite books of the year by the time I finished first issue.

Giant Days follows the daily college life of Esther de Groot, Susan Ptolemy and Daisy Wooten, three young women whose personalities couldn't be more different, or their friendship more genuine. That daily life includes everything from chance encounters with ex-boyfriends to battling the flu to just making it to class.

If all of that sounds rather mundane, I think that's part of the point. For me Giant Days was a nostalgic trip to my first year of college, where every single facet of my daily life felt like a big deal. I was living on campus, with people I'd just met. Whether I made it to class, stayed out partying all night, had enough to eat or had clean laundry to wear was pretty much all on me. It lends a weight to the every day that just isn't there until you move away from home.

And that's what I love about Giant Days--it really captures that vibe. Allison's character's are fully realized by the end of the first page--you know who they are, and you already love them. The dialogue and dynamics between the three friends is just a joy to read. And Lissa Treiman's art is such a perfect match for the writing that I was surprised to learn Allison originally drew Giant Days himself when it began as a webcomic. She brings a warmth and energy to the characters that really reinforces the friendship they share.

Those original Giant Days stories now serve as a kind of prequel to this new six-issue series from BOOM! Studios, although I jumped in and had no problems getting acclimated. ComiXology has both the original three issues and this new series, so you can get the full Giant Days experience if you want the early stuff.

Giant Days #1 is a wonderful introduction into the world of Esther, Daisy and Susan, but it's also a great reminder of just how big that first year of college was for many of us. I can't recommend this book enough. Issue #3 drops tomorrow, so if you see this series at your local shop, grab it.
Posted by See Brian Write at 2:02 PM