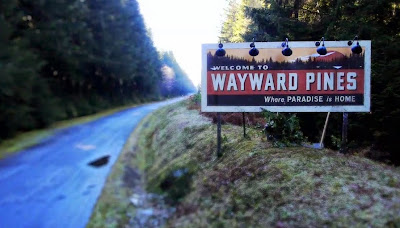 Since seeing the first trailer for Fox's new show Wayward Pines, it's been on my "most anticipated" list. Between the Twin Peaks vibe and the fact that I love both Matt Dillon and Carla Gugino, I had high hopes for this one. After watching the pilot this weekend, I'm definitely in for the rest of the 10-episode season.

Wayward Pines is based on the trilogy of novels by Blake Crouch, and centers around a Secret Service agent named Ethan Burke, who travels to the small Idaho town of Wayward Pines in search of two missing agents. One car accident later, Burke finds himself in the town hospital with no wallet, no phone, and a whole lotta weirdness. As he tries to continue his investigation, he realizes that there is something very, very off about Wayward Pines. Like the fact that he can't leave, for example. 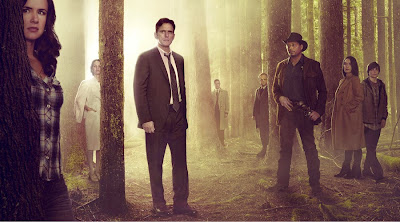 As cool as the town of Wayward Pines is, it's the cast that really stands out for this show. In addition to Dillon and Gugino, we get Terrence Howard (Empire) as the Sheriff, Juliette Lewis (Christmas Vacation, Natural Born Killers) as a potential ally for Burke, Siobhan Fallon Hogan (SNL, Seinfeld), Melissa Leo (Homicide: Life on the Street), Toby Jones (Captain America: Winter Soldier). The cast is just phenomenal.

The pilot episode was directed by M. Night Shyamalan, and I think that's mostly a good thing here. I've always felt that Shyamalan's strength was creating atmosphere--that sense of mysterious weirdness where everything just feels slightly twisted. It's his payoffs that rarely live up to the hype. But fortunately, he's not writing or directing all of the episodes. He does a nice job of establishing the strangeness of Wayward Pines in the pilot, and it's a place I want to spend some more time in. We also get some answers by the end of the first episode, so all in all, it's a pretty effective opening chapter.

For a show that is clearly inspired by Twin Peaks, Wayward Pines establishes it's own identity that's a little more grounded in reality while still creating a great sense of mystery.
Posted by See Brian Write at 6:40 AM