The Super-Secret Project is Revealed! Announcing HARROWED (THE WOODSVIEW MURDERS #1)! 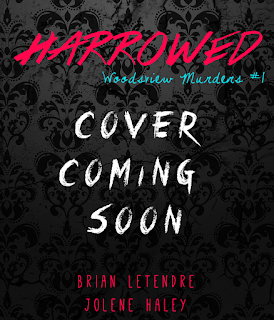 Those of you who follow either Jolene Haley or I on Twitter have seen us posting about a "super-secret project" for over a month now. Today, we can finally tell everyone what we've been working on!

Jolene and I are beyond excited to announce HARROWED, the first book in our new WOODSVIEW MURDERS series. It's a YA horror story inspired by our love for both '80s slasher flicks and '80s rock/metal.

This book marks my first foray into the YA genre, and I could not found a better partner to work with than Jolene Haley. This has honestly been the most fun I've ever had on a project, as apparently Jolene and I share the same brain. 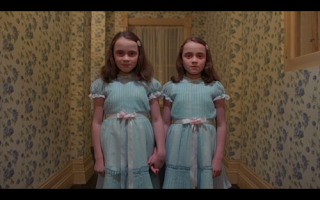 There's so much we want to share right now, but we're going to pace ourselves, so today let's start with the blurb for HARROWED:

Avery Blair has accepted the fact that nothing exciting ever happens in her small town of Woodsview, Massachusetts. As the editor of the high school blog, she prays for something--anything--to come along that would make for a great headline.

The tiny community of Woodsview has become the hunting ground for a killer known as The Harvester. The killer targets Avery and her classmates, stalking their every move and terrorizing them with morbid messages.

With the help of her boyfriend Jason, her best friend Quinn, and an aging detective who can't keep her off the case, Avery dives head-first into her own investigation. She discovers that the secret of the Woodsview Harvester is buried in the town's history and its annual Harvest Festival celebration. With every clue she uncovers,

Avery grows closer to unmasking the killer--and becoming the next victim. Avery Blair has finally found a story to die for...if she can stay alive long enough to write it.

And here's a little more about my amazing co-author, Jolene Haley:


Jolene Haley is an author and the curator of the best-selling horror anthology The Dark Carnival through Pen & Muse Press. She also runs a YA horror blog The Midnight Society, the author resource site Pen & Muse, and Hocus Pocus & Co., a small horror press. She writes every genre under the sun, but prefers horror. When she’s not writing she can be found cuddling her two dogs and enjoying the beach, where she lives.

HARROWED (THE WOODSVIEW MURDERS #1) will be released on September 22, 2015 through Horror Twin Press. We'll be revealing a lot more over the next couple of months, but for now you can add HARROWED on Goodreads and follow the #WoodsviewMurders tag on Twitter to keep up with all the fun.

Stay tuned! Check out Jolene's blog as well for updates!!

Email ThisBlogThis!Share to TwitterShare to FacebookShare to Pinterest
Labels: Harrowed, Horror, The Woodsview Murders, Writing, YA