Back at Camp and Ready to Rock! 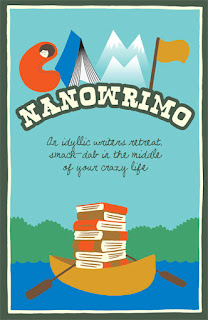 I seriously have no idea where May and June went. Okay--I have some idea, but I still can't believe we're already into July! And that means it's Camp NaNoWriMo time again!

I am bringing some serious writing momentum into camp this month. If you've been following me on Twitter, the blog or listening to the podcast, then you know I have been working with the amazing Jolene Haley on HARROWED, the first book in our new YA horror series, The Woodsview Murders.

HARROWED actually was born during the final week of April's Camp NaNo event. Jolene and I had been talking about working on something together, and Jolene made it happen. Ideas were kicked around, and by the time April was done, we were thousands of words into the first draft of HARROWED.

Our work on that book had been going all all through May and June, and we are finishing the story now, with an eye on a September release.
SO, our Camp NaNoWriMo project for July is going to be book two of our Woodsview Murders series. As we were writing book one, we were jotting down plenty of ideas and plot points for the next book (and the one after that, and the one after that), so we have a pretty good idea of where things are going.

I really like the idea of writing the first two books back-to-back. The characters are so fresh in our minds, because we've never left them. And like any good slasher sequel, things will be even crazier this time around.

Stay tuned for Camp NaNo updates, and get ready for some really cool stuff we'll be doing as we lead up to the HARROWED release!

You can follow all the HARROWED fun on Twitter by checking out the hashtags #WoodsviewMurders and #TeamBrolene.
Posted by See Brian Write at 8:51 AM