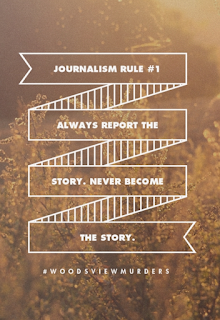 Over the past four months, I have been writing at a pace I have never achieved before. April's Camp NaNoWriMo project was a novella in the Parted Veil series, which I managed to get the first draft of finished. Right about the time April was coming to a close, Jolene Haley and I were starting our first project together--Harrowed, the first book in the Woodsview Murders series. Since that time, we have eaten, slept and breathed the Woodsview stories, and are deep into the first draft of book two already, which was July's Camp NaNo project.

But starting tomorrow, it's editing time. In fact, there will be so much editing, revising and rewriting during the month of August that it deserves it's own moniker--Editpalooza.

Editpalooza will be filled with laughter, tears, blood-curdling screams and a healthy dose of profanity. Jolene and I have our game faces on (maybe we'll take a picture of them), and we are ready to roll. But we don't want to hoard all of the editing fun for ourselves.

So, if you have a project that you need to edit, revise or rewrite, you should join us this month. We'll be using the hashtag #Editpalooza to chronicle our journey, and we'll be sharing some great editing resources both here and over at Jolene's site. We might even be recording a special editing-focused episode of the See Brian Write podcast (stay tuned). We might even have guests posts!

So, if you're just coming off of Camp NaNoWriMo, or if you've got a project that needs some love, then get get ready for Editpalooza!

P.S. If you're interested in keeping up with the Woodsview series, I would recommend checking out the #WoodsviewMurders and #TeamBrolene hashtags on Twitter, where Jolene and I are constantly blathering on about everything having to do with Woodsview.

P.P.S. We're also running a giveaway! If you want to win a copy of Harrowed, some Halloween treats, or a mystery box of ARCs--sign up below!

a Rafflecopter giveaway
Posted by See Brian Write at 1:41 PM