We're over halfway through August now, and we've got another full week of edits on Harrowed under our belts. As I talked about in last week's post, I'm writing Harrowed with the amazing Jolene Haley, and it's my first collaboration. So, I wanted to chronicle bits and pieces of the creative process, because it's been an absolute blast.

So, week one was all about making sure nothing in our story was broken. Once we finished that, we moved on to identifying what parts of the story needed tweaking. Jolene and I went through the book again, making comments and notes along the way, and coming up with a list of areas we thought needed some work. 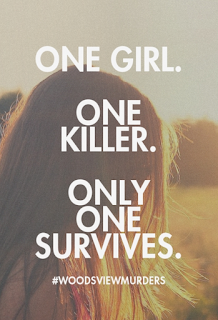 This past Sunday, Jolene and I had another epic two-hour Skype session, where we went over the majority of the notes we'd made and talked through how to address them. Some were small fixes that we made right then and there, and some were bookmarked for more work later. Big or small, we were on the same page for everything. And that's what's been so great about working on this project together--we share the same vision for these characters and their story. It's actually pretty amazing how in sync our interpretations of these characters are. things that aren't even on the page, but come up in the conversation when we discuss why these characters are doing what they do.

If you haven't been following the #WoodsviewMurders hashtag on Twitter, then you may have missed the announcement of the Woodsview Case Files podcast.

That's right--we're putting together a podcast to coincide with the release of Harrowed in September. You can follow @WoodsviewFiles for more info as we get closer to launch, as we've got some fun stuff planned for the show.

One of the things we'll definitely be doing on the podcast is talking more about our creative process for this book and the series so far. If the two-hour Skype sessions are any indication, we'll have plenty to discuss come September.

But for now--back to edits.
Posted by See Brian Write at 8:27 PM