It's FIRST & GOAL for Laura Chapman in September! 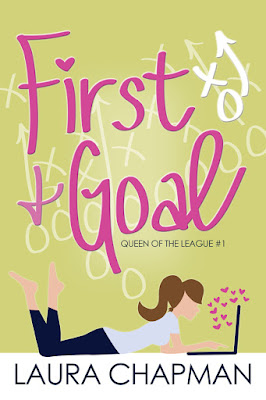 Back in May, writer Laura Chapman joined me on the See Brian Write podcast to talk about her NaNoWriMo experience, as well as her books The Marrying Type and Hard Hats and Doormats.

We also talked a bit about a project she was working on at the time, and yesterday, that project was announced! Laura's new book First & Goal will be released on September 9th--here's the synopsis:

When Harper Duquaine’s no-nonsense approach to work unintentionally ruffles the wrong feathers at her new job, she joins her co-workers’ fantasy football league to prove she can hang with the guys. Only problem: she doesn’t know a sleeper from a keeper (or any of the other lingo thrown her way).

Embroiled in a world of lineups, stats, and trades, Harper’s quest to make nice topples when her competitive streak emerges. And her promise to herself that she’ll be a strong, independent woman and leave the drama and heartache behind is seriously tested when she catches the attention of her two biggest competitors: J.J., a local celebrity determined to win a fantasy championship, and Brook, the mild-mannered coach who seems too good to be true. Both threaten her resolve to remain single… and, more importantly, her chances at winning the prize pool.

With a slew of conflicting advice in her real and fantasy worlds, Harper must figure out how to play the game and come out a winner.

You can find out more over at Laura's website, and you can add First & Goal on Goodreads right now.

You can also listen to the podcast episode in the player below!