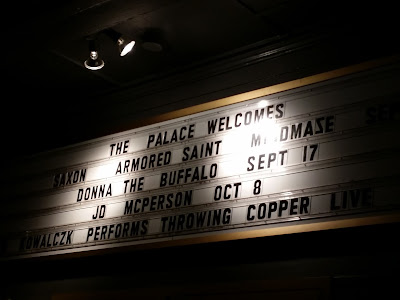 Saturday night I headed to the Stafford Palace Theater in Connecticut to see Saxon and Armored Saint, two veteran metal bands that I had never gotten to catch live before. I've been a big fan of Armored Saint since the late '80s, and Saxon is a legendary metal band that has been putting out albums for over thirty-five years now.

I love seeing concerts in small venues, and the Stafford Palace Theater has a capacity of 400, which makes it among the smallest I've seen a show at. If I had to guess, I'd say there was only about 200-250 people there to see the show Saturday night, but that didn't stop all of the bands from putting on an amazing show. 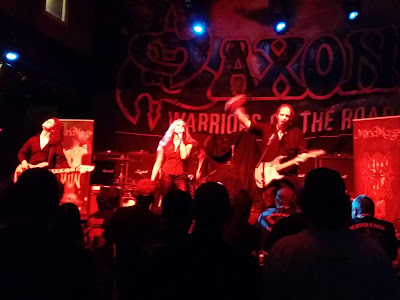 Up first was MindMaze, a prog/power metal outfit fronted by the brother-sister duo of Sarah and Jeff Teets (vocals and guitar, respectively). They came out with a lot of energy and had a great set. Sarah's soaring vocals were impressive and made everyone in the crowd pay attention, while Jeff's solos were absolute shredders. By the time they finished their set, MindMaze had made quite a few new fans, including me (I picked up their latest CD "Back From the Edge"). 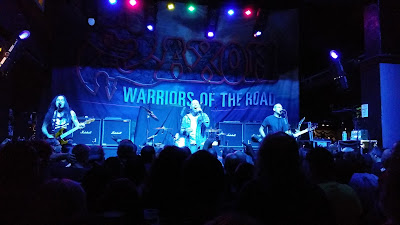 Up next was the band I came to see--Armored Saint. I've been a fan for years, but had never gotten the chance to see them live, as they don't do a lot of touring. They did not disappoint. From the second they walked onstage, the entire band exuded confidence and a sense of fun that made it impossible not to enjoy yourself.

They kicked things off with "Win Hands Down," the title track from their new album, which perfectly showcases every member of the band. Guitarists Jeff Duncan and Phil Sandoval pick-scratched over the building drums of Gonzo, while both Joey Vera and John Bush seemed to let the music overtake them as the song exploded into action. Duncan and Sandoval shredded and harmonized, Bush belted out the rousing chorus and Joey Vera jumped around the tiny stage like Angus Young.

Armored Saint has plenty of anthem songs, and tunes like "March of the Saint," "Raising Fear," "Can You Deliver" and "Reign of Fire" had everyone singing and fist-pumping along. Even a few glitches with the sound system couldn't stop Armored Saint from kicking ass for their entire set. I'm so glad I got to see them live, and I hope they tour more, because they're an amazing live band. 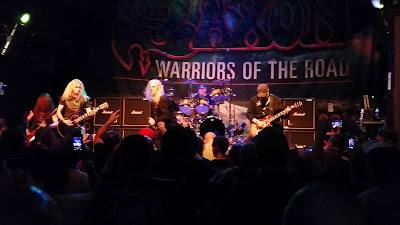 And then, there was Saxon. It's impossible not to have heard of Saxon if you're an old school metal fan, but I had never been a huge fan of theirs--until now.

Let me start by saying that lead singer Biff Byford is 64 years old. I bring that up because in the span of a couple hours, he put most lead singers I've seen in the past decade to shame. The man can still sing like he's in his thirties, and it was a sight to behold.

Not to mention the freaking stage presence of Byford. He had the crowd eating out of his hand in the first five minutes. He wasn't doing that cheesy "put your hand in the air" crap, either--he just talked to the crowd like an actual person. He was having fun, and that vibe was infectious.

Guitarist Paul Quinn has also been there since the beginning of Saxon, and he had the crowd fired up with every riff and solo that he banged out. Nigel Glockler (drums), Nibbs Carter (bass) and Doug Scarratt (guitars) were firing on all cylinders as well, especially Carter, who was headbanging and whipping his hair around Cliff Burton-style all night.

Saxon played a parade of classic hits, from "Motorcycle Man" to "Heavy Metal Thunder" and "Denim and Leather." They also mixed in some newer tunes, including the title track of their upcoming album twenty-first studio album, "Battering Ram." The set ran two hours (longer than they were supposed to play), and not once did Byford or any of the other members of Saxon seem the least bit ready to leave the stage. They played like they were in front of a stadium crowd of 25,000, not 250.

Going into the show on Saturday night, I expected Armored Saint to put on a great show--and they did. I did not expect Saxon to be one of the best live bands I've ever seen, but that's why I go to live shows. Saxon has earned every bit of their legendary status, and I will be digging into a lot more of their back catalog, and picking up the new CD when it drops October 16th. 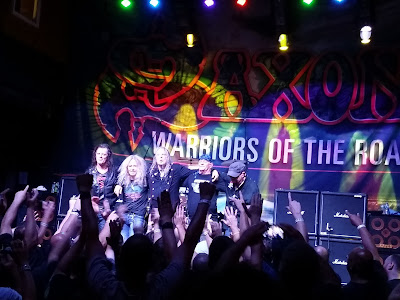