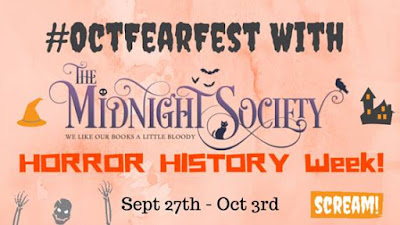 Over at The Midnight Society, we've got a ton of really fun horror-themed activities going on for the month of October. Every week of the month has a theme, and we're kicking things off this week with horror history.

When I think of horror history, I think of the greats like Lovecraft, Chambers and Poe, who paved the way for the genre and inspired so many of the writers that came afterward. But I also think of '70s and '80s horror movies, as I still believe the the late '70s and early to mid-'80s were the greatest time for horror films, and so much of what we associate with the genre was established in that era of film making.


So, my entry for horror history week will be to live-tweet a viewing of the original EVIL DEAD. This 1981 film is an absolute masterpiece of low-budget film making, and it put both Sam Raimi and Bruce Campbell on the map.

The live-tweet will start at 8:30PM EST, and I'll be using the hashtag #OctFearFest on Twitter. I'll be watching my personal copy of EVIL DEAD, but you can watch the movie for free on Hulu right here. You can also rent it from Amazon for about $3, and it's totally worth it.

Over the course of the month, I'll be revisiting all three of the original EVIL DEAD trilogy of films, leading up to a live-tweet of ASH VS> EVIL DEAD on Halloween night.