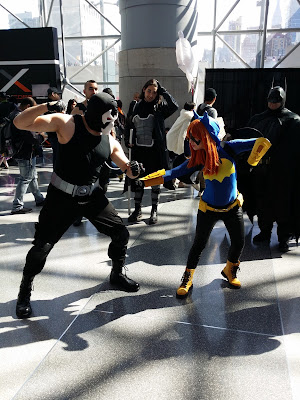 We got back from New York comic Con last night, and what an amazing four days it was! In the coming weeks, you'll see and hear news, reviews and interviews on Secret Identity, Co-Op Critics and The Midnight Society. I've already got daily recaps of NYCC up on Secret Identity here:

Over on Co-Op critics, we have a gallery of some great gaming cosplays, which you can see here.

I'd like to thank NYCC and ReedPOP for allowing me to come and cover the show again this year. They've always been great to Matt and I, and we will be talking about the convention for months to come.

Later this week I'll be posting a review of the premiere of Ash Vs. Evil Dead over on The Midnight Society, and Matt and I will be recording a special episode of the Secret Identity podcast, where we'll recap our experiences at the show. On Co-Op Critics, I'll be writing up my impressions of both Just Cause 3 and Dark Souls III, which I got some hands-on time with.