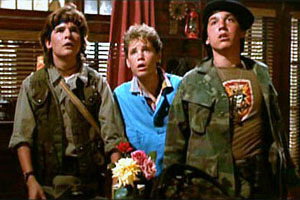 How's it going, fellow Wrimos? Everyone hanging in there, plugging away each day? Even if you're behind on your word count, don't panic--there's still a lot of November left to make up ground.

I wrote a lot of words this week, and I feel pretty good about most of them. Our NaNo project sits at 32,000 words as I write this, which is pretty much exactly where we should be. I can already tell this story will go way beyond 50k in terms of total word count, but Jolene and I will get as much of it done as we can this month.

As far as the story itself, an interesting thing happened this week. The more Jolene and I talked about it, the more we realized that one story was not going to be enough for our characters and the world we've created. And so, Orchard Pointe will now be a series!

I'm not at liberty to talk more details yet, but we've dropped a couple hints if you're following Jolene or I on Twitter. Needless to say, we will now have two YA horror series under the Horror Twins banner, and we are very excited about both of them! They're both very different, but we think that if you dug HARROWED, you'll like the Orchard Pointe series as well.

I can tell you is that this week I wrote about clowns, peanut butter and Fluff sandwiches, origami, nightmares and arcade games. So, make of that what you will.

Okay. I'll tell you one more thing. The Lost Boys is one of the many inspirations for this book, but maybe not necessarily in the way you might think.

Okay, that's it. Don't tell Jolene I said anything. I have to get back to writing now. I'll check in again next week, and don't forget to follow Jolene and I on Twitter for more hints about our current project and other stuff to come.
Posted by See Brian Write at 8:51 AM