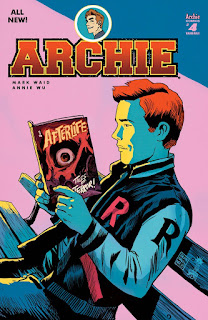 We're almost halfway into December, and my post-NaNoWriMo content binging is in full swing. As I wrote about last year, the creative output of NaNoWriMo often leaves me needing to recharge my creative batteries in a big way when it's over. And even though I made sure to read, watch and listen during November, I was still really hungry coming out of NaNo.

So, here's a few of the things I've been devouring over the past couple of weeks to recharge the creative batteries:

I've been catching up on my comics reading, and I'm loving Starfire, Amazing Spider-Man, Codename Baboushka, Behemoth, Archie, Jughead, Revival, Constantine the Hellblazer and more. I'm also re-reading a lot of my G.I. Joe comics, as I'm considering writing a Kindle Worlds story or two involving some of my favorite Joes. I wrote a X-O Manowar story a couple years ago and it was a blast.

On the movies and TV front, I'm almost caught up with Supergirl, The Flash, Arrow, Scream Queens and Jessica Jones now. I've also begun re-watching the Star Wars films with my kids in anticipation of The Force Awakens.

For music, I've been going back to some of my favorite releases of the year while I write, including Queensryche's Condition Human, Europe's War of Kings and Armored Saint's Win Hands Down.

Finally, I've slowly begun making my way through my book pile of shame with Faith McKay's Lipstick and Zombies, Kristen Strassel's Forever Home and Halloween Night: Trick or Treat, an anthology from a bunch of my Midnight Society mates.

So, lots to catch up on, and it couldn't come at a better time. Even though NaNo is over, there's still a ways to go on the first draft of our Orchard Pointe book, and I need the extra inspiration to keep November's momentum going.

What are you catching up on now that NaNo is over?
Posted by See Brian Write at 5:05 PM