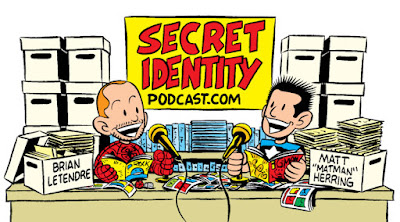 In March of 2006, Matt Herring and I posted the first episode of the Secret Identity podcast, a weekly show in which we discussed comics, movies, TV and other areas of geek culture. Almost ten years and 1500+ hours of programming later, we just posted our 700th officially numbered episode. You can click the link to get it, download it from all the usual spots, or listen to it right now in the player below.

All told, we've produced over 900 episodes of Secret Identity in the past nine-plus years, discussing thousands of comics, movies, shows, games and more. We've also featured interviews with almost 450 creators during that time (with dozens more we haven't posted yet).

In terms of both numbers and longevity, Secret Identity is in limited company. When we first started our little show, podcasts in general were not huge yet, and there was only a handful of shows focused on comics. And as we approach out ten-year anniversary, there are hundreds of comic book shows across the podcasting landscape, but many of the shows we came up with are no longer with us.

I don't stop to look back very often, as I'm busy recording and putting the show out every week. But, with this milestone and our upcoming tenth anniversary, I think some reflection is called for.

It's been an amazing experience to produce this show for so long. It's been a staple in my life for almost ten years. When we started this show, my daughter was three--she's in seventh grade now. My son hadn't even been born yet--he's in fourth grade now.

I have spent more time with Matt Herring over the last decade than anyone outside of my wife and kids. He has become the brother I never had. 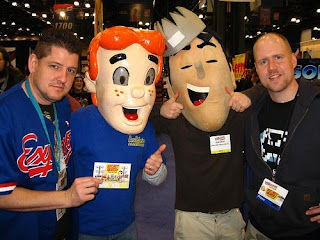 In addition to my relationship with Matt, the absolute best part of doing Secret Identity for so long has been watching the amazing community build up around the show. We have made so many friends--both listeners and creators--over the years, that my life is much richer for having done this show. Many of the people that are a regular part of my life today came into it because of Secret Identity. Matt and I are both grateful to and humbled by each and every person who takes time out of their own lives to listen to the show.

Next week we'll be kicking off the next chapter of Secret Identity with episode #701. The format will be slightly different than the last couple of years, and is designed to keep the show moving and be consistent episode to episode. It will still feature all the discussion and segments fans have come to expect, in a bit more streamlined fashion. Episode #701 begins with a discussion on the format update, so you'll hear more then.

Oh--I also mixed up a new theme song for the show, I love creating themes for the podcasts I produce, and the Secret Identity theme had not been updated since 2011, so we were due. I hope you dig it.

One last note--if you're interested in the full history of Secret Identity, including a list of all the creators we've had on the show, you can check out the newly updated "About" page over on the Secret Identity website.

Thanks for listening!
Posted by See Brian Write at 6:43 AM