David Bowie released a new album called Blackstar on Friday, his 69th birthday. He passed away two days later, after fighting a battle with cancer that he kept secret. The man was creating right up until the day he died, and he will continue to inspire forever.

Blackstar itself is an amazing album. It's hauntingly beautiful, made all the more so when you realize it's essentially a chronicle of Bowie facing his own mortality. The album is filled with lyrics where Bowie is addressing his own death, his legacy and what comes after. It's also filled with the type of experimentation that Bowie was known for throughout his multi-genre-spanning career.

And speaking of legacy, when you stop to think about the one Bowie leaves behind, it's almost overwhelming. More than two dozen studio albums, over fifty music videos and some of the greatest solo and collaborative efforts ever heard in music. Oh yeah--he was a movie star as well. 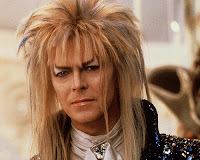 For me, Bowie will always inspire me to take creative risks. He symbolized creation without boundaries or limits. And how he faced death might be his most inspiring work of all.
Posted by See Brian Write at 6:11 AM