Percolation is One of My Favorite Problem-Solving Tools

Whether you're a pantser or a plotter, when you actually get down to writing your story, you'll eventually get to a point where something just isn't working the way you wanted it to. It could be a scene, it could be a character's arc, it could be anything. But when you you hit that point, it can kill the momentum you've been building up to that point.

An example came up for me this week while working on the first book in the Orchard Pointe series. Jolene and I have a wonderful villain for this story, who has been maneuvering behind the scenes for some time to this point. This villain's plans are becoming more bold as we head toward the inevitable confrontation with our main character. All of that is working out very well, but there is a particular piece of this villain's story that is not as good as it could be. This issue needs to be addressed for our villain to be the best version of the character we envisioned from the start.

Now, when I know there's a nagging issue out there, my brain wants to fix it. And if I don't do something to tell my brain that things are okay, I will only think about that one nagging issue, thus killing my writing momentum. BUT, only focusing on the nagging issue rarely solves the problem, because if the issue was easily solved, the answer would be more readily apparent.

So, I have to let it percolate.

Other people probably have plenty of names for this process, but I like percolation. One reason of course is because I'm obsessed with coffee. But another reason is that it actually captures how I envision the process. 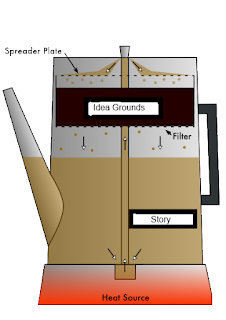 So, for my story percolator, I need "idea grounds." For the Orchard Pointe character I mentioned before, these would be any ideas that Jolene or I have generated that could potentially address our problem. Some of these could be from the original outlines and brainstorming docs we created for the character, but many of them will be new ideas we generate either together or separately.

I put all these ideas into our outline doc, so they're all documented in one place. But I'm not choosing any one of them right now as the solution. Because most likely, one of those ideas alone will not be the solution.

So, I put these in the back of my mind and let the story we've created so far percolate through those ideas. As that process is happening, I go about my writing, continuing to work on the overall story. As I'm doing this, all of the potential solutions to our story problem are circulating through, until finally, the solution becomes apparent. This could be a few days later, or even longer, but in my experience, it doesn't usually take longer than a week or so.

The "heat source" in this scenario is continuing to write. By continuing to work on the story instead of stopping until I figure out that one piece, I'm providing the creative "heat" that drives the percolation process. This reinforces the concept that I have to keep creating if I want to solve the problem.

This may sound like a bunch of gibberish, but it's the best way I can explain how I tackle a story problem without letting it derail me. I gather all the ideas--no matter how crazy they seem--and let them percolate until the right answer filters through.

What's your problem-solving process like?
Posted by See Brian Write at 9:29 AM