Editpalooza 2016: Orchard Pointe is Almost There! 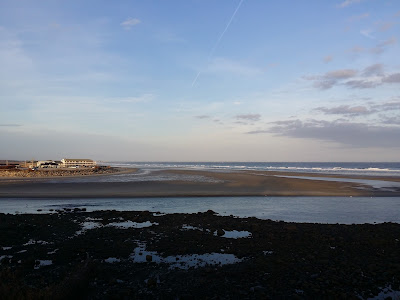 Over the past month and a half, Jolene and I have been doing edits and rewrites on Orchard Pointe, and I'm happy to say we're almost there!

This past week marked a major milestone, as we finished a significant rewrite of a supporting character's storyline that affected the last third of the book.

I've mentioned before that edits and rewrites remind me of Jenga, where pulling one piece out can bring the entire structure crashing down. I think about that concept quite a bit when reading other people's work, watching movies, or even playing video games. In every creative project, there are things that are less than perfect, And through the revision and polishing process, choices always have to be made.

I always ask myself:

Will this change make the story better?
If I change this, what else does it affect? Does it break anything?
How much of the story will need to be rewritten to accommodate this change?
How does this affect the book's deadline? Is it worth delaying the book for?

There are plenty of other questions as well, but those are some of the biggies. I'm sure all creators have similar lists of questions.

Anyway, the reason I blathered on about that is to provide context for the rewrite Jolene and I just completed. A couple weeks ago, we were discussing the arc of a supporting character. And it became clear through our discussion that the character in question kind of faded in the last third of the book. Jolene had some great ideas about ways we could make it better, and we talked about the aforementioned questions of what it would take to do that. In the end, we decided that not only would the story be better for the changes, but the changes were worth it, and if we stayed on track, they could be made in our current revision schedule.

So, we did it. And looking back now, it was absolutely the right choice. The story is stronger for it, and the book feels more complete. We have also left the character in a place that we can explore in future stories, which is always a good thing.

With that rewrite out of the way, we are now in the final stages of edits for Orchard Pointe. We'll be talking a lot more about it as we get closer to release, and keep your eyes peeled for a cover reveal soon!

Posted by See Brian Write at 7:30 AM No comments:

Cover Reveal: A Pizza My Heart 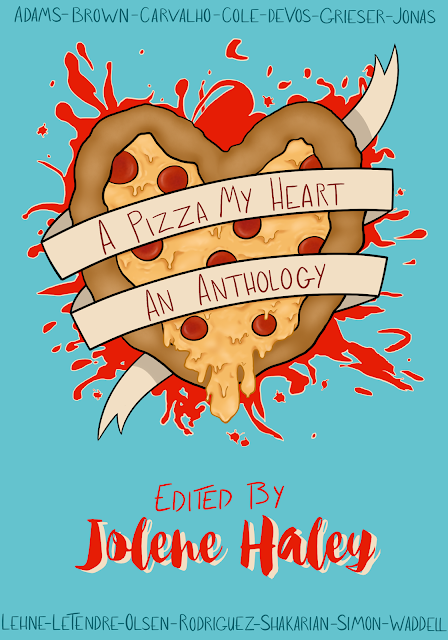 Last month, I told you about a new pizza-themed fiction anthology I was going to be a part of--A Pizza My Heart. Well today, I am happy to share with you the amazing cover that Haley Crosby designed for this project. I think you'll agree, it's mouth wateringly good.

If you missed my last post, here's the info on this fantastic project, which was put together by my amazing writing partner, Jolene Haley. 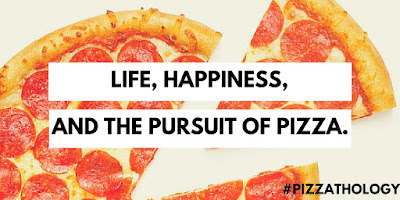 A Pizza My Heart Blurb

Gooey cheese and warm pepperoni, with a side of kissing and murder.

A Pizza My Heart is a quirky and fun anthology that crosses all genres. Fifteen extraordinary authors have united to tell stories of mystery, mayhem, romance, danger, deceit…and pizza.

Sometimes spicy, sometimes cheesy, but always delicious, A Pizza My Heart invites you to explore life, happiness, and the pursuit of pizza.

A Slice of Adventure by Maria Carvalho
Between Slices by Andy Grieser
Fresh, Hot, and Deadly by Rena Olsen
KissingDancingPizzaMURDER by Darci Cole
Kneadful Things by Jenna Lehne
Love Pizza No. 9 by Vanessa Rodriguez
Madame Miraval’s Pizza Place by Kelly deVos
Password Is… by Jolene Haley
Pizza by Emily Simon
Pizza Buddy by Brian LeTendre
Pizzamergency by Brett Jonas
Survival Pizza by Rebecca Waddell
The Last Stop at the End of the World by Jamie Adams
The Pizza Guy by Jessi Shakarian
Where There’s Pizza by Jasmine Brown

Join the book buzz using hashtag #Pizzathology
Posted by See Brian Write at 9:21 AM No comments: 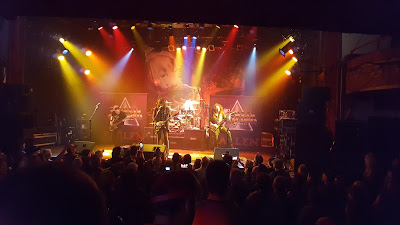 My love of '80s rock and metal is well documented, from the Thrash it Out podcast I do with Antony Johnston, to the Liner Notes segments that have been featured on Secret Identity for years. I went to high school from '88 to '92, so I grew up in the MTV era and was a teenager during the height of the hair metal movement.

The past ten years have seen a real resurgence of the bands I grew up listening to, and many of them are putting out music today that stands alongside the best stuff they've ever done. A lot of them are also touring again, and are just as great live as they were back in the day. 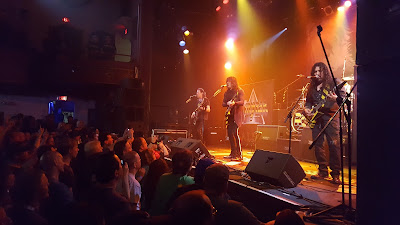 Stryper is an interesting band because many people dismissed them for their Christian themes and lyrics. As a kid who went to Catholic school through sixth grade, Stryper was the one metal band that my parents actually didn't mind me listening to. And listen to them I did. Stryper was among my favorite bands, and still is to this day.

Sadly though, I didn't get to see them live when I was a kid, because I was always too young to get into the venues they played at. The first time I actually saw them in concert was in 2009, and they were amazing. 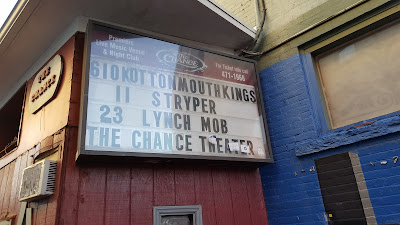 So it was with great anticipation that I drove down to Poughkeepsie, New York this past Saturday with my pal Matt and my nine-year old son to see Stryper play at The Chance Theater, a venue that has hosted everyone from the Police to Twisted Sister to David Bowie.

Matt is the host of the Stryper podcast, and he interviewed both lead singer Michael Sweet and Guitarist Oz fox before the show. We got to tag along, which meant my son got to not only meet the guys, but to hang out on the tour bus for a bit. It will probably take him a few years to realize how amazing that moment actually was, but he was psyched to meet the band and hang out for a bit before the show. 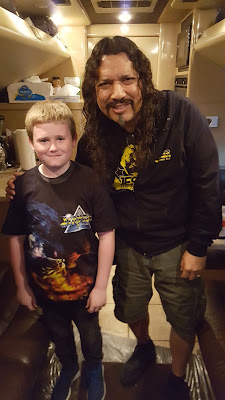 After a few opening bands, Stryper took the stage and ripped through 22 songs that featured a great mix of old and new, as well as a few covers. I am a huge fan of The Yellow and Black Attack album, and they played three cuts from that one--"You Know What to Do," "Loud 'n' Clear" and "C'mon Rock." Of course they also played hits like "Soldiers Under Command," In God We Trust" and "To Hell With the Devil," a song for which they invited 15-year old Mariah Formica up on stage to sing lead vocals for. She was amazing. You can watch the video of that performance right here.

All in all, the show was great, the night was great, and the memory of sharing it with my son is one I will cherish forever. If you get a chance to see Stryper live, take it.
Posted by See Brian Write at 7:11 AM No comments: 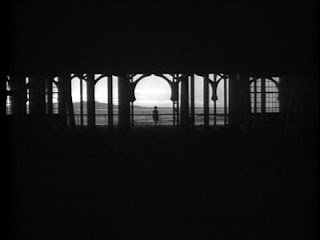 The reason I missed last week's update (and almost this week's) is because I have a bad sinus infection, something I learned when I went to the doctor today after a week of being stubborn and trying to will this illness away. Lesson learned.

So, let's talk about edits! I am just about through my first pass of Orchard Pointe edits, and Jolene is deep into her first pass as well. So, she's reading through edits I've made and making more of her own, and as I go through another time, I'll be reading through her edits and making more of my own, and so on and so on. We are also having weekly video calls where we are discussing story points, making decisions together and just generally making sure we're staying on the same page.

The great news so far is that nothing is broken. From a functional standpoint, the story works. Which means we can focus on making it better.

So, that's the latest on the edits front. I'm looking forward to getting through this sinus infection so I can put my full energy into getting this book finished. Thankfully, I have the best teammate in the world, who has been killing it as usual.
Posted by See Brian Write at 3:11 PM No comments: