TerrifiCon Was a Blast! 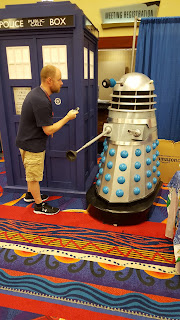 This year's TerrifiCon at Mohegan Sun in Uncasville, CT was amazing. Matt Herring and I were exhibiting at the show for Secret Identity, doing interviews for the podcast and hosting and moderating panels all weekend.

There were so many highlights it's hard to pick just a few, but here goes:

My son and I got to see John Wesley Shipp (The Flash) again and meet Katrina Law (Arrow) for the first time. Both were super nice and were great to my son, which makes me even bigger fans of theirs.

Matt and I hosted two panels on starting your own podcast. I love talking about podcasting and especially love to talk with people who are just starting their own show. We met a ton of great people who had questions, feedback and some really great ideas for shows. I can't wait to check out their podcasts when they launch.

On Sunday, I got to moderate my dream panel. Anyone who l knows me knows that I am a lifelong Spider-Man fan (my son's name is Parker). I was lucky enough to moderate a panel called The Amazing Spider-Man: 35 Years of Writing Spider-Man. A veritable Mount Rushmore of Spidey writers were on the panel--Dan Slott, J.M. DeMatteis, Roger Stern and Peter David.

These four guys are responsible for some of the greatest storylines and  moments in Spider-Man's history--Kraven's Last Hunt, The Death of Jean DeWolff, The Origin of the Hobgoblin, Spider Island and so many more. I was so enthralled with listening to them that I forgot to start recording the panel until about ten minutes in. I'm actually hoping to get a full recording of it (audio of video) so I can share it with everyone, because it was a blast.

On top of all that, I got to catch up with some of my comics friends that I rarely get to see, and we got some great interviews for the podcast. All in all, TerrifiCon was a fantastic show, and i want to thank the man behind that show, our pal Mitch Hallock, who continues to grow TerrifiCon into one of the best shows in the country. I can't wait until next year! 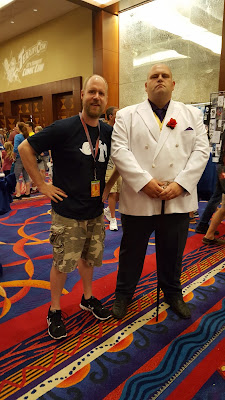