Earlier this week, Jolene and I released a new short story that takes place after the events of our novel Harrowed. It's called "After the Storm," and it's a Christmas story about friendship featuring our two main characters. The story is currently available to read on Wattpad for free.

We were excited to give that present to Woodsview fans who have enjoyed Harrowed and are patiently waiting for Haunted (which is coming in early 2017). But then we got to thinking--what about people who haven't read Harrowed? How would they enjoy the Christmas story if they've never read the story that came before it?

Well, it just so happens that we had some promotional days left on Amazon, so we decided to make both Harrowed and "After the Storm" free from now until December 28th. We want everyone to spend a little time in Woodsview over the holidays. 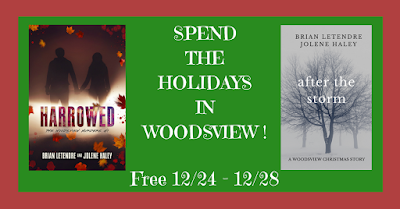 Click here to get Harrowed on Amazon Kindle for free!

Click here to get "After the Storm" on Amazon Kindle for free!

To all of our current Woodsview fans--thank you! We hope you like "After the Storm." And to those just visiting Woodsview for the first time--welcome! We've got such sights to show you...
Posted by See Brian Write at 9:01 AM

Email ThisBlogThis!Share to TwitterShare to FacebookShare to Pinterest
Labels: After the Storm, Harrowed, haunted, The Woodsview Murders