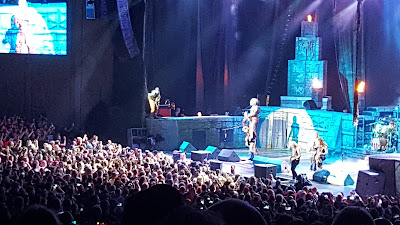 The Xfinity Center in Mansfield had been known as Great Woods for years around here (and always will be), and it was always a place I'd wanted to catch a show. So when I found out that Mansfield was the closest Iron Maiden was coming to me this summer, I grabbed tickets. I couldn't have imagined a better show for my first experience there. And I'm super glad I got to share it with my son, and my good buddy Matt.

I hadn't seen Iron Maiden since Ozzfest 2005, and they have not lost a step at all. Bruce Dickinson is still an energetic frontman who never stops flying around the stage. The band sounded absolutely amazing, and although I am not the biggest fan of Maiden's BOOK OF SOULS album, the six songs they did play from it gave me a greater appreciation for them. Here's Maiden's setlist from the show:

Encore:
The Number of the Beast
Blood Brothers
Wasted Years 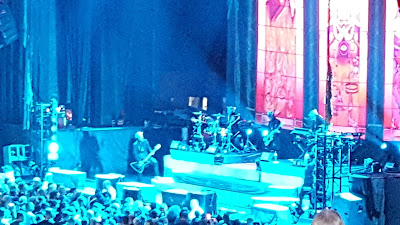 The surprise of the night however was Ghost. I'm guessing a lot of Maiden fans weren't super familiar with them, and Ghost impressed from their first tune to their last. They played songs from all of their studio release, and Papa Emeritus sounded fantastic. The costumes and the theatrics just added to the experience. I was glad they sounded as good live as they do on their albums. Here's Ghost's setlist from the show:

All in all, the concert was fantastic, and the setup of the amphitheater really made you feel like you were almost on stage with the band. I would definitely check out a show in at Great Woods again.
Posted by See Brian Write at 10:11 AM