I'm super excited to share the cover for my new novella Chasing the King in Yellow with you! The cover was designed by my good friend Jeff Rodgers, who has done all of the covers for my Parted Veil series. Here it is! 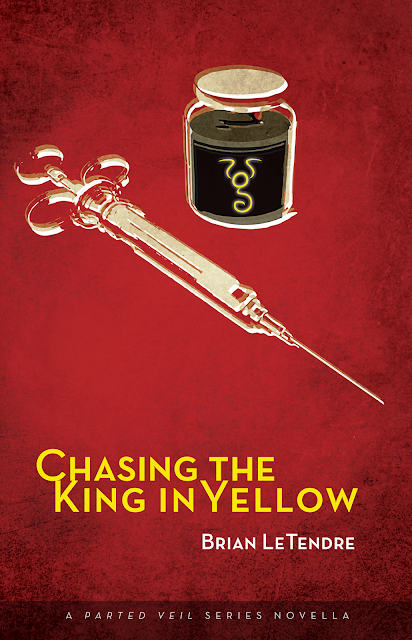 Chasing the King in Yellow is in many ways a sequel to the first book in the Parted Veil series, Courting the King in Yellow. After that first book, that story of Frank and Sam continued in the background, as Lovecraft's Curse and Lovecraft's Pupil featured new characters. This book gives readers a window into what's been happening with Frank and Sam, and helps set the stage for the next novel in the Parted Veil series. As far as the cover design, Jeff and I wanted this cover to be distinctive, but clearly evoke the feel of the first cover. I think Jeff nailed it.

Here's the back cover blurb:

Now members of the Parted Veil themselves, Sam and Frank continue to follow the cult's activities and thwart them whenever they can. A rash of disappearances has led them to a small town in Tennessee, where an old mining operation may be the cult’s latest workshop of horrors.

Chasing the King in Yellow will be released on Friday, October 13th. You'll be able to grab it digitally on both Amazon and Drive Thru Fiction, and print copies will also be available over at Drive Thru.

And speaking of print copies, if you are coming to CT Horror Fest in Danbury tomorrow (9/16), I will have a limited number of print copies of Chasing the King in Yellow available! This is your chance to grab the book almost a month before anyone else can!

Stay tuned for more news as we get closer to the release date!
Posted by See Brian Write at 12:46 PM