Rubix Kube is a Celebration of Music's Greatest Decade 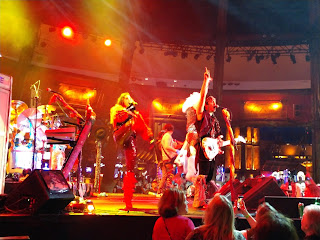 If you've listened to any of the music podcasts I've done over the years, you know that I am a diehard '80s music fan. And not just rock and metal, either--I love all '80s music. Lucky for me, there is a bad out there making sure the legacy of music's greatest decade lives on--Rubix Kube. I got a chance to see them play last night, and they put on a fantastic show.

Cherie Martorana (vocals), Scott Lovelady (vocals), Steve Brown (guitar/vocals), Greg Reigle (bass, vocals) John Laspina (drums) and Mike Hunter (keyboards, keytar, vocals) gave the audience almost two hours of nostalgia-filled awesomeness with music from Madonna, Def Leppard, Prince, Van Halen, The Buggles, Journey and about a dozen more amazing artists. Both musically and vocally, they captured the soul of each song and reminded everyone why the music of the '80s truly is the best.

After the show, I got a chance to meet guitarist Steve Brown, who I have loved for since 1990, when I bought my first Trixter album. He was super nice and chatted with my Power Chords podcast co-host Matt and I for almost twenty minutes after the show. After watching him nail all those songs and talking to him in person, it's not hard to see why he is so well thought of in the rock community, or why Def Leppard chose him to fill in for Vivian Campbell due to Campbell's battle with cancer. 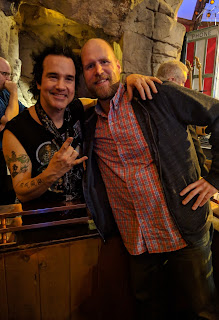 If you get a chance to see Rubix Kube, take it. Support this band that is bringing live '80s music to the masses.
Posted by See Brian Write at 8:48 AM No comments: