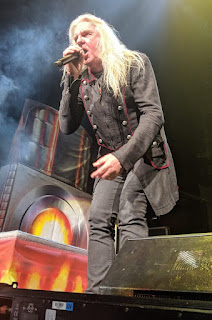 On Thursday March 23rd, the mighty Saxon once again proved they are a force of nature in concert. I've seen them in a club with less than 200 people. I've seen them in a small venue that was packed to the gills. And now after seeing them in an arena filled with metal fans, I can say conclusively--it does not matter what venue you see them in--when Saxon plays, Saxon slays.

Opening up for Judas priest, Saxon had a bit of a condensed set, but they jammed it full of hits from all voer their catalog. After opening with the title cut off their fantastic new album Thunderbolt, Biff and the boys went back to 1983 for "Power and the Glory," making sure that fans old and new were along for the ride. The rest of the set rolled out a few more songs from the new album, peppered in between classics. And of course, Biff masterfully worked the crowd. By the time they finished with "Heavy Metal Thunder," everyone was basically foaming at the mouth. Here's the full setlist:

It's a good thing that Judas Priest was up right after them, because they are one of the few bands in existence that can follow Saxon live and have it not feel like a letdown. I am so thankful I got to see Saxon with Priest, and even more grateful my son got to see them as well. They are legends, and as always, they delivered.
Posted by See Brian Write at 9:06 AM No comments: