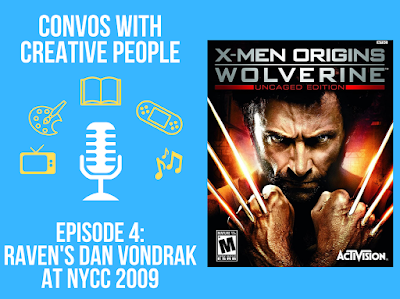 Convos with Creative People is a podcast about creative paths and processes. Each episode features interviews with creators of all genres and mediums, and discussions on writing, art, design, marketing, music, podcasting, and more. Hosted by me, Brian LeTendre.
In this episode I dug into the 2009 archives of the Secret Identity podcast for an interview I did with Raven Software’s Senior Creative Director Dan Vondrak, about the X-Men Origins: Wolverine game.
Why am I pulling up this interview now? Because Dan Vondrak directed the campaign of this year’s Call of Duty: Black Ops Cold War. I am loving the campaign, and what is kind of incredible about it is that much of it was created remotely during the pandemic.
IGN did a fantastic video about the campaign’s development, which you can watch below:

The idea for this episode came from the first time I booted up the game, as I got hit with a wave of nostalgia. Not because the game itself is set in the ‘80s (though that is a big deal for me as someone whose formative years were that decade), but because of the studio logos that are emblazoned on the screen when it starts. In addition to lead developer Treyarch, there are a slew of other studios who worked on the game, including Beenox, High Moon Studios, Sledgehammer, and Raven Software.
I could write an entire series of blogs on the work of those studios (and I likely will at some point), as they created some of my favorite games of the Xbox 360/PS3/Wii generation. Just in case any of those names don’t ring a bell:
Which brings me to today’s blast from the past. Back in 2009, I was in the middle of my game journo stint, covering games for Comic Book Resources. The Secret Identity podcast was also going strong at that time, and NYCC was the place where we would get almost an entire year’s worth of interviews done for the show.
It was at NYCC 2009 that I got to interview Senior Creative Director at Raven Software Dan Viondrak, who was the project lead on X-Men Origins: Wolverine, a game that was released alongside the upcoming movie.
The game featured a story written by Marc Guggenheim, who you may know from a variety of comic-related projects, including his run on Wolverine of course, as well as runs on Flash and Amazing Spider-man, and his development, writing and production work on the Arrow and Legends of Tomorrow TV shows.
X-Men Origins: Wolverine received good reviews at the time, and most agreed that the mechanics were the strong point. It felt great to play as Wolverine, and the game really captured the brutality of his combat skills, and how far he could push his healing factor.
Sadly, unless you own a copy of the game and a console to play it on, you’d have a tough time playing X-Men Origins: Wolverine today. Thye license expired and it’s not available digitally. But there are plenty of used copies floating around out there, and it’s definitely worth checking out.
Raven made a Wolfenstein game that was released later that year as well, and also the underrated Singularity in 2010, before working on the Call of Duty franchise for the past decade.
Here are links where you can find more about X-Men Origins: Wolverine and Raven Software:
Raven Software:
https://www.ravensoftware.com/home
X-Men Origins: Wolverine game trailer:
https://youtu.be/E31qWQz4bHY
X-Men Origins: Wolverine full playthrough:
https://youtu.be/mFV0qBtVDhU
X-Men Origins: Wolverine game on Wikipedia:
https://en.wikipedia.org/wiki/X-Men_Origins:_Wolverine_(video_game)
As always, you can follow me and keep up with my creative projects on Twitter @seebrianwrite.
Posted by See Brian Write at 2:21 PM No comments:

Convos With Creative People | Don Cardenas: Comics, Community, and Creating During a Pandemic 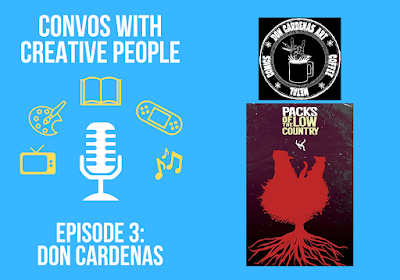 Convos with Creative People is a podcast about creative paths and processes. Each episode features interviews with creators of all genres and mediums, and discussions on writing, art, design, marketing, music, podcasting, and more. Hosted by me, Brian LeTendre.

In this episode I welcome artist, musician, fellow podcaster, and friend Don Cardenas to the show. I’ve known Don for over five years now, and we first connected around our mutual love of music, as he was a listener of the Thrash it Out podcast. He’s an amazing artist, and I interviewed him about his book Packs of the Lowcountry for the Secret Identity podcast back in 2017 (in fact, it was the last interview we did for the show, which ended later that year).

As we always do whenever we catch up, Don and I cover a lot of ground in this discussion. In addition to talking about his work and his process, we ended up talking quite a bit about finding your creative community, and adjusting creative expectations for yourself in the midst of a pandemic. In fact, this conversation was the inspiration for the blog series I recently started about rebuilding my creative routine (you can read the first installment here).

I’d like to thank Don for being so gracious with his time, and for the great discussion as always. Go check out his work, and listen to his podcast!

Here are links to where you can find Don, as well as some of the stuff we talked about in this episode:

Packs of the Lowcountry on ComiXology:

I Wish it Was Xmas Today (Cover): https://youtu.be/ajKIHBrnA5o

Posted by See Brian Write at 10:12 AM No comments: