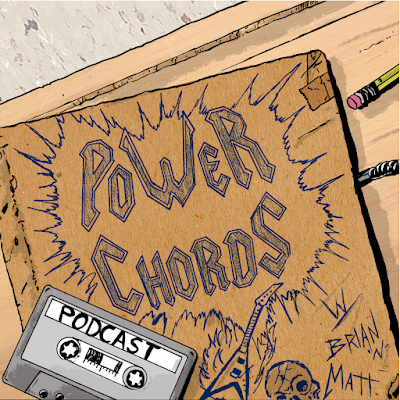 In our last episode of 2021, we look back on our favorite albums, songs, shows, and more from this past year.

Thanks for listening! If you're subscribing on iTunes or Google play, please leave us a review, as it will help spread the word about the show! You can find more news, reviews, and discussion at powerchordspodcast.com.

Posted by See Brian Write at 1:04 PM No comments: 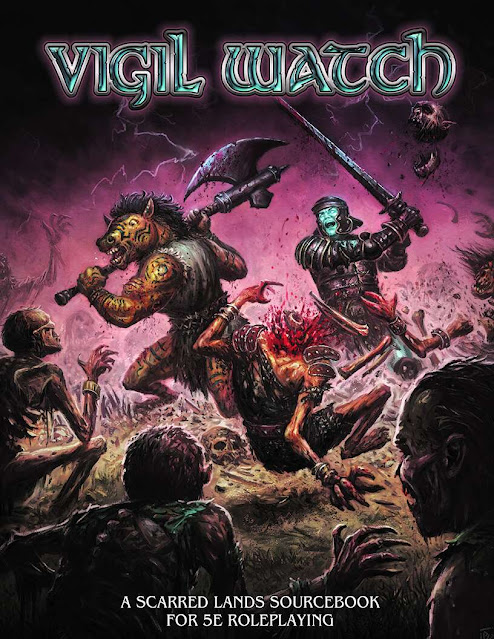 When the Scarred Lands setting first debuted during the d20 boom of the early 2000s, I bought every single book in the line. The way the setting was introduced, and information about it revealed, felt like the unraveling of a mystery. I first got introduced to the world of Scarn through the Creature Collection and Relics & Rituals, which set the tone for the world through the monsters and magic that existed within it.

Then the Scarred Lands Gazetteer came along, and it did a wonderful job of giving me just enough information about this war-torn world to begin having my own adventures in it. The original location descriptions in the gazetteer were from the records of the Veshaisn Vigils, a group dedicated to fighting the Titanspawn, and collecting and documenting information from all across Ghelspad to aid in that fight.

An updated version of that original gazetteer is incorporated into the current Scarred Lands Player’s Guide, but the Vigil Watch supplements offer an even deeper dive into some of the locations and cultures of the Scarred Lands, in a way that strengthens the lore of the world, and offers jumping off points for adventures.

The Vigil Watch: Collected Volume covers six areas of Scarn: the Toe Islands, Mansk, Leoni, the Iron Court, the Festering Fields, and Lokil. In the original gazetteer, most of these locations got anywhere from one to three paragraphs. Here, they get an average of ten pages or more. From major NPCs, to well-detailed local landmarks, each section provides enough detail to make any one of these locations a central one for an adventure, or an entire campaign. 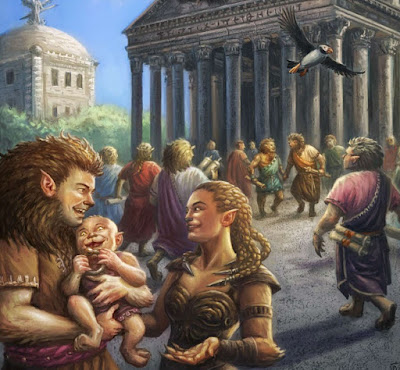 Leoni is a great example of this. In the original gazetteer, Leoni didn’t even exist. Its primary inhabitants—the Manticora—were described in the original Creature Collection as chaotic evil, man-eating, catlike creatures. The Manticora have since been updated to be a more well-rounded, playable race of lionfolk in the new Scarred Lands Player’s Guide, and Leoni is a cultural center that draws from three areas of Ghelspad—the Bleak Savannah, the Haggard Hills, and the Blood Steppes. Here in the Vigil Watch supplement, we get to learn more about the makeup of the city, its festivals and traditions, and some great story hooks for future adventures. One example is the Hunter’s Library, “a sprawling center of several buildings and open areas filled to the brim with shared knowledge, fascinating creatures, and plants from across the continent.” The library is well-detailed, and there are suggestions for encounters with some of its residents sprinkled throughout the exhibit descriptions.

Another highlight for me was the chapter on Lokil, which prominently features another library. While the Library of Lokil was detailed more in the original Scarred Lands books, new events and adventure hooks are presented in this chapter, as a prominent NPC has disappeared, there is a murder mystery afoot, and the depths of the mountain the city is built into are home to a growing threat to the library and all of Lokil’s residents. This chapter features numerous story hooks for GMs to build on, as well as an adventure that could provide the beginning of a much larger campaign.
Each of the locales featured in the Vigil Watch: Collected Volume gets this treatment, and include story ideas ranging from encounter suggestions to full-blown adventures. Whether you’re looking for adventures across the seas, mountains, or plains, there is a starting spot here for you, and enough material to build those adventures into something much more. 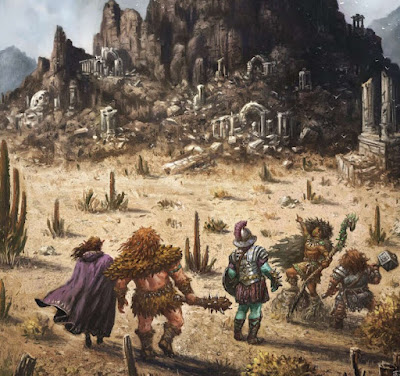 I never got to play a full campaign in the Scarred Lands during its initial run, so when Onyx Path revived the setting several years ago, I was over the moon about it. Even with all of the books that White Wolf had originally put out, there was still so much more to explore, learn, and document about the world of Scarn. And that’s the balance Onyx Path has to strike with each new release—continuing to expand the Scarred Lands, while making the setting welcoming to those who may be unfamiliar with what has come before. With the Vigil Watch supplements, they are striking that balance really well, and building on the foundation of the original material.

Vigil Watch: Collected Volume is available now at drivethrurpg.com. You can find a full list of Scarred Lands products, past and present, over on the Onyx Path website, and the list includes links to everything currently available at DriveThruRPG.

Posted by See Brian Write at 6:47 PM No comments: