Looking Back and Moving Forward

I've been clearing out the cobwebs on this blog over the past week or so, getting ready for 2022. I'm not going to make any grand proclamations about my creative goals for this year, with one exception: This year will be about creating things that bring me joy (see my new Twitter banner above, which has a little more whimsy than the old one).

I don't need to go into what an apocalypse the past two years have been, but I will say that I underestimated--by a grand margin--how these past two years would affect my creative output. I had already been struggling to balance work projects and personal projects since making a career change in late 2017. For those that don't know, I had been doing marketing, copywriting, and brand strategy work for years on a part-time basis, but that became my actual full-time job in 2017. For three years, most of my creative bandwidth was spent creating a content library for work, including creating, hosting, and producing an award-winning podcast. I love creating content, and I loved creating it for my job. Even after taking on a new role in 2020, I was still creating a ton of content on a regular basis, for both internal and external purposes.

All of which is to say that my personal creative projects suffered. My one consistent outlet has been podcasting, and even then, my writing/interview podcast took a back seat as I prioritized the two music podcasts I do (Power Chords and Thrash it Out). On the writing front, my book projects were put on the back burner while I spent most of my time writing for work.

But then a couple of really cool things happened in 2021--two projects I had contributed to were published after being in progress for years. 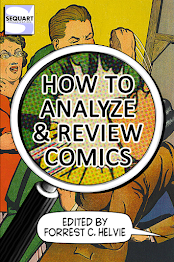 The first was How to Analyze and Review Comics, a collection of articles and essays meant to be a resource for journalists, academics, students, bloggers, and fans. Forrest Helvie had been working on bringing that project to life for more than five years. My chapter in the book was about interviewing creators, something I've done hundreds of times over the years, both as a podcaster, and when I was contributing to Comic Book Resources from 2008-2010. When Forrest started putting that project together, the Secret Identity podcast was still in its prime. I actually had to adjust my bio for the book before it went to print, as Matt and I ended Secret Identity in November of 2017. But being able to contribute to this book was a nice bookend to a time I was completely immersed in the comics industry, and it gave me a sense of closure for that period.

The second project that was published this year was a bucket list item for me. About five years ago, I was lucky enough to get the opportunity to contribute to a tabletop roleplaying game (TTTRPG) book. For those that don't know, I have been an rpg fan since I bought the original Dungeons & Dragons red box off of my friend's older brother in elementary school. I've played TTRPGs for a good chunk of my life, and even got my name in the credits of a few books as a playtester. I have always wanted to write for TTRPGs, and twice in the past I had projects almost come to fruition--an intro adventure for a game called Chronicles of Ramlar, and an adventure for Living Kingdoms of Kalamar that never saw the light of day. But file those under "everything happens for a reason," because my first official TTRPG project could not have been a cooler opportunity.

World of Darkness: Ghost Hunters from Onyx Path Publishing is pretty much a dream project for a horror writer and rpg fan like myself. The book is a resource on paranormal investigation that can be used in all of the World of Darkness games (Vampire, Wraith, Mage Werewolf, Changeling). 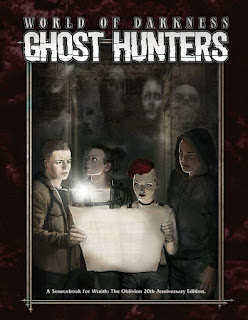 Not only did I get to help chronicle what the history of ghost hunting is WoD, but I also got to create characters, abilities, equipment, and bits of lore as well. One of the most fun things about this project was sprinkling in Easter eggs from various horror movies and TV shows, which people seemed to really like (yes, I did read the comments).

As I mentioned, this was a bucket list item for me, and I'm hoping to do a lot more in the TTRPG space over the next several years. In fact, there is something I wrote for the Ghost Hunters book that did not make it in, but I may put out through the community content portal on DriveThru RPG, the Storytellers Vault.

Speaking of future plans, let's talk 2022. As I said earlier, I'm not making a bunch of bold declarations at this point, but there are definitely things to expect from me this year.

First off, I'll be starting a new podcast project this month, and it's a return to talking about comics. The podcast is called 2099 Revisited, and in it I'll be taking a look back at the entire run of 2099 comics that Marvel put out in the 90s. Here's the teaser trailer:

You can subscribe to the podcast now wherever you get yours from, and you can check out 2099revisited.com for more info.
I'll still be putting out new episodes of both the Power Chords and Thrash It Out podcasts as well.
On the writing front, you can expect more regular content here, including updates on my solo projects, and the stuff I am working on with my partner in crime, Jolene Haley. We are currently working on wrapping up the Woodsview Murders series, as well as some other projects I'll talk about when the time is right.
I'm also going to be writing some articles about content marketing that I have been kicking around for some time. From building the story of an organization or product, to building a content engine for your business, I want to share some of the things I've done and learned over the past several years. Some of these articles will be going up on LinkedIn as well.
Anyway, that's some of what I have cooking for this year so far. All of these projects are things that bring me joy, and I hope to share some of that joy with you.
Stay tuned!
Posted by See Brian Write at 12:25 PM