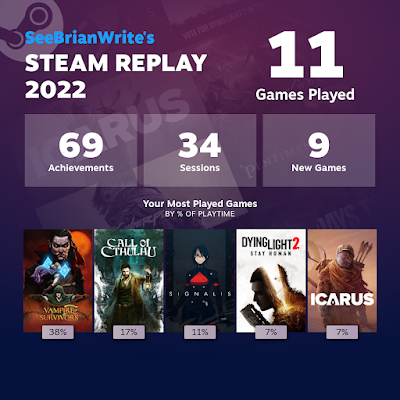 I play most of my games on Xbox, but for whatever reason Xbox didn't do one of these recaps that every other platform put together for 2022. As such, my gaming stats for Steam are nothing to write home about this year, but it provides a good baseline to work from for 2023, as these numbers will go up dramatically. Why? Because I recently purchased a Steam Deck, and it has already become my preferred way to plat most games.

I'll write up a separate post about my experience with the Steam Deck so far, but one thing to note is that all of the games shown in the recap above except one (Icarus) have been played primarily on my Steam Deck.

Of the games listed above, the two I most highly recommend are Signalis and Vampire Survivors. Signalis is an old school survival horror game that harkens back to the original PlayStation days. And Vampire Survivors is a kind of reverse bullet hell game that has to be experienced to be believed. It's incredibly addictive, and if not for Elden Ring, would probably have been my personal game of the year. Trailers for both games are below.

Wishing everyone a good year of gaming in 2023!

Posted by See Brian Write at 9:14 AM No comments: 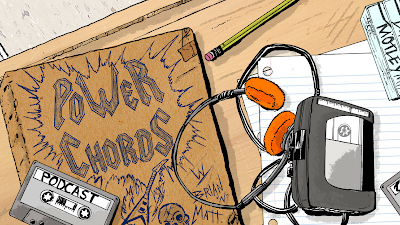 In our last episode of 2022 we look back at our favorite albums, songs, concerts, and more from this past year. See you in 2023!

Thanks for listening! If you're subscribing on iTunes or Google play, please leave us a review, as it will help spread the word about the show! You can find more news, reviews, and discussion at powerchordspodcast.com. You can also hit us up on twitter at twitter.com/powerchordspod, and email us at powerchordspodcast@gmail.com.

Posted by See Brian Write at 9:12 AM No comments:

Thrash It Out is back, and this special episode is the "listener's choice" for Volume 6! Lucky for us, the choice was Faith No More's incredible 1992 album, Angel Dust.
LISTEN HERE!! 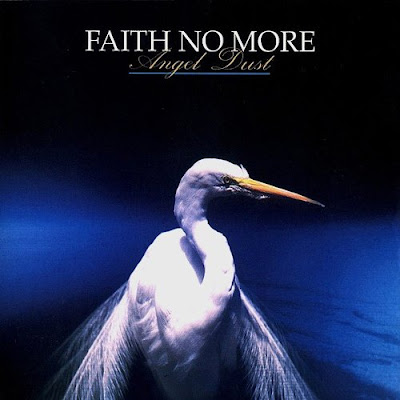 Get more episodes at thrashitout.com!
Subscribe on Apple Podcasts
Subscribe Wherever with the RSS Feed
Support us on Patreon!
Posted by See Brian Write at 9:03 AM No comments: